Ballarat Kart Club was the latest stop for the AUSTRANS Victorian Country Series when drivers filled the pits at Haddon Park Raceway for round five with racing held on the 675 metre long track, amazingly there is two drivers still un-defeated in finals in the series to this point, Brayden Flood (TAG Restricted Light) and Scott King (TAG 125 Heavy) after the completion of the fifth round.

KA4 JUNIOR LIGHT
Nikki Watson became the third driver to win a feature in the class through this season’s series after she bested nineteen over competitors on race day, including the stand out driver of the season Jaxson Cox. Last meetings winner Nicholas Schembri won both the heat and the pre final whilst Cox who qualified poorly in thirteenth place climbed to third place in the heat to put himself into overall contention for the day.

The final was sensational with Schembri leading Watson  on lap one before she controlled the early stages before Cox pounced from third to take the lead  on lap five for a couple of laps before Watson led once more on lap seven. Cox again took the lead and for the next seven laps held the lead whilst a win was not yet assured. Watson made a sensational pass to win from Cox by .203 of a second, Schembri crossed the line third, Amber Miller and Corey Herbertson rounded out the top five. Watson also had the top one lap time for the day in the class with 31.423 recorded during the final.

Cody Gorringe who had earlier been running in the top five had a turn one tangle in the final with Nerina Beard & Ethan Church as they went three wide into the turn. Light contact occurred & Gorringe had to wait for the field to pass before re-joining the action and finishing sixteenth.

Benjamin D’Alia returned to the winners circle after his loss in round for at Horsham when he proved too strong for Sunraysia racer Aidan Solomon in round five. Wil Kelly-Merrifield, Maximum Fahey and Daniel Hookway rounded out the top five to finish.

Having top qualified, D’Alia went on to win the heat, the pre final and the final setting the fastest one lap time for the class at 31.816 as he stormed home with a huge margin between he and the field. Solomon was second all the way in the final behind D’Alia.

Simon Fallon was a new winner in the KA3 Senior Light class when he came out on top of Jacob Dowson by just .205 of a second after fifteen gruelling laps in the final where Fallon led all bar one lap. Horsham winner Haiden Smith was in third place ahead of Joseph Clough and Giles Rogers.

Dowson had top qualified with a 30.651 lap time and then won the heat. Fallon then rose to the top when he won the pre final before securing the hard fought win in the final.

The racing in the KA3 Senior Heavy class was sensational when Remo Luciani had to fight from as far back as fifth on track during the final to come through and win as the drivers ran nose to tail lap after lap. Fifth placed Ryan Aitken was the top qualifier, Luciani himself qualified back in sixth place.

Aaron Jackson led lap one of the fifteen lap final event, Mitchell, Branson, Aitken, Bryce Woollard and Luciani were all lined up chasing. Luciani slowly picked off his one of his competitors’ (every one and a half laps) before securing the lead on lap eleven after Branson who was leading at the time dropped out of contention after what he diplomatically advised would have been described as a racing incident.

Woollard was strong in second place and was fastest on track at 31.283, however Luciani would hold on to cross the line .168 of a second in front of Horsham winner Woollard with Jackson, Branson and Aitken the top five.

Twelve competitors battled in the Cadet 12 class with Matthew Domaschenz picking up the win after Will Harper looked like the driver to beat in the prelims. Harper won the heat and pre final however when it came to the big finale, it was Domaschenz who led all fifteen laps who would secure the big win. Bronson Boult was fastest during the final with a 33.308 best lap, yet he could not pass the leader who secured his win by .063 of a second. Ryan Morgan was third, Harper fourth and Ballarat member Joseph Fawcett finished fifth.

Domaschenz had only qualified seventh earlier and needed to make some ground in the heats to secure a position up front for the final race of the day. Anton Hortis was the top qualifier.

Brayden Flood who was yet to lose a final in this year’s AUSTRANS VCS in the TAG 125 Restricted Light division, didn’t give anybody a sniff during round five either as he top qualified, won the heat, won the pre final and then the final ahead of Tom Owen, Joseph Clough, David Schulz and Matthew Ferrari.

Whilst Flood was dominant in race mode, Clough was the fastest driver in the class for the day with a 30.787 lap time in the final. This however was no match for the consistency lap after lap of Flood who stretched his lead out to almost seven seconds before he greeted the chequered flag.

Owen had a battle to reach second as it took him until lap nine to secure the position whilst Lachlan Hill was second in the final until lap nine when things went pear shaped for him & he dropped out of the race altogether, whilst Brendan Torpy had a very lucky escape when his steering failed sending him spearing in front of the field accelerating up the front straight before coming to a rest on the other side of the main straight.

Domenic Romeo went one better than the Horsham final when he secured victory at Ballarat after a great battle with Henry Johnstone in the KA3 Junior class. Romeo was the heat and pre final winner after Tyler O’Leary earlier qualified on top.

Romeo led the final early before Johnstone made a move on lap four. It took until lap thirteen before Romeo moved past Johnstone to take the lead and hold on by just .235 of a second at the line. Behind Johnstone was Jay Coul, Nicholas Schembri and O’Leary. Romeo was fastest in the final with a best time of 30.677.

Scott King continued on his winning ways for the season despite a challenge from Ryan Aitken both in the heat and then the final.

King qualified top with a fastest time of the day for the TAG 125 Heavy class recording a 30.677 lap before Aitken won the heat race. King then secured the win in the pre final to claim pole position for the final.

Aitken then led the final from lap one and it took until the fifth lap before King could secure the front position and lead the next ten laps. King won by .400 of a second from Aitken, Aaron Jackson, Brad Anderson and Ballarat’s Paul Feely.

TAG RESTRICTED MASTERS
The season long dominance of Steven Malkin came to an end in emphatic fashion in round five for the TAG Restricted Masters class with John Page taking a clean sweep of the day’s results.

Ballarat Karter John Page was top qualifier, heat winner, pre final winner and went on to win the final, his first ever VCS round win, by over a second from another local Anthony Warner, Clinton Gobourne, Andrew Stubbs and Malkin who had a great battle with Stubbs before Stubbs took fourth with two laps to go. Fast time for Page was 31.519 in the pre final whilst Malkin never looked likely to win after his sixth spot qualifying result.

Kyle Rethus returned to the winners list in TAG 125 Light when he was able to lead from start to finish coming to the finish line only .212 of a second ahead of Kirby Hillyer in a barnstorming finish with Horsham winner Bradley Stepney-Marsh behind them in third place.

Not only did Rethus win the fifth round, he won the weekend you could say when he became a father for the first time on Saturday night before racing, a great way to spend father’s day weekend!

Earlier Jordan Rae was the top qualifier and Jordan Pianezzoloa who won the heat and the pre final was the fastest competitor for the class when he recorded his 30.417 lap in the heat race where he headed Rethus by over a second.

Ben Holliday reversed a second place result behind Jesse Lacey at Horsham when the two finished the other way around at Ballarat in the Cadet 9 class. Holliday was terrific all day taking a clean sweep of proceedings when he was top qualifier, heat winner and pre final winner before taking an all the way win from Lacey, Ruby Gibson, Ballarat’s Akasha McEachren and Darcy Stonehouse.

Holliday’s winning margin was .642 of a second and Lacey took until lap thirteen to pass Gibson and move into second whilst Gibson in the heat race earlier put down the fastest lap of the day of 34.291.

Ballarat local Sam Wren returned to the Victorian Country Series whilst it is his Sprintcar off season and had a great scrap with Michael Angwin and Andrew Hayes in the feature after securing top qualifier, the heat win and the pre final win earlier.

Despite all the winning, Wren was not the fastest in the class all day, Angwin setting a 32.260 lap time in the pre final to take that mantle. Hayes led Wren and Angwin in the final until lap eight before Wren passed Hayes, it took Angwin until the last lap to get past Hayes for second and finish up .430 of a second behind Wren who also was a first time winner in the VCS. Martin Golledge was fourth and Aldo Distefano fifth.

Ben Armstrong went back to back when he followed up his Horsham round four victory with another win in the TAG 125 Restricted Heavy class after he defeated the fastest driver of the day for the class, Matthew De Stefano, by just .102 of a second in the final.

Armstrong had qualified the fastest, then won the heat and pre final before he had De Stefano chase him around the Ballarat track for fifteen laps and despite his 31.795 second lap De Stefano crossed the line for second, Luke McPherson continued his consistency with another top three result then Luke Mason and Raymond Dumesny both from the host club rounded out the top five. Wayne Armistead qualified second and looked like he might stir things up before trailing out in ninth spot in the final.

Congratulations to the Kerbriders of the day at Ballarat

Each received a set of race boots and Motul oil courtesy of KerbRider.

The prizes are voted by the stewards for good hard and clean racing. 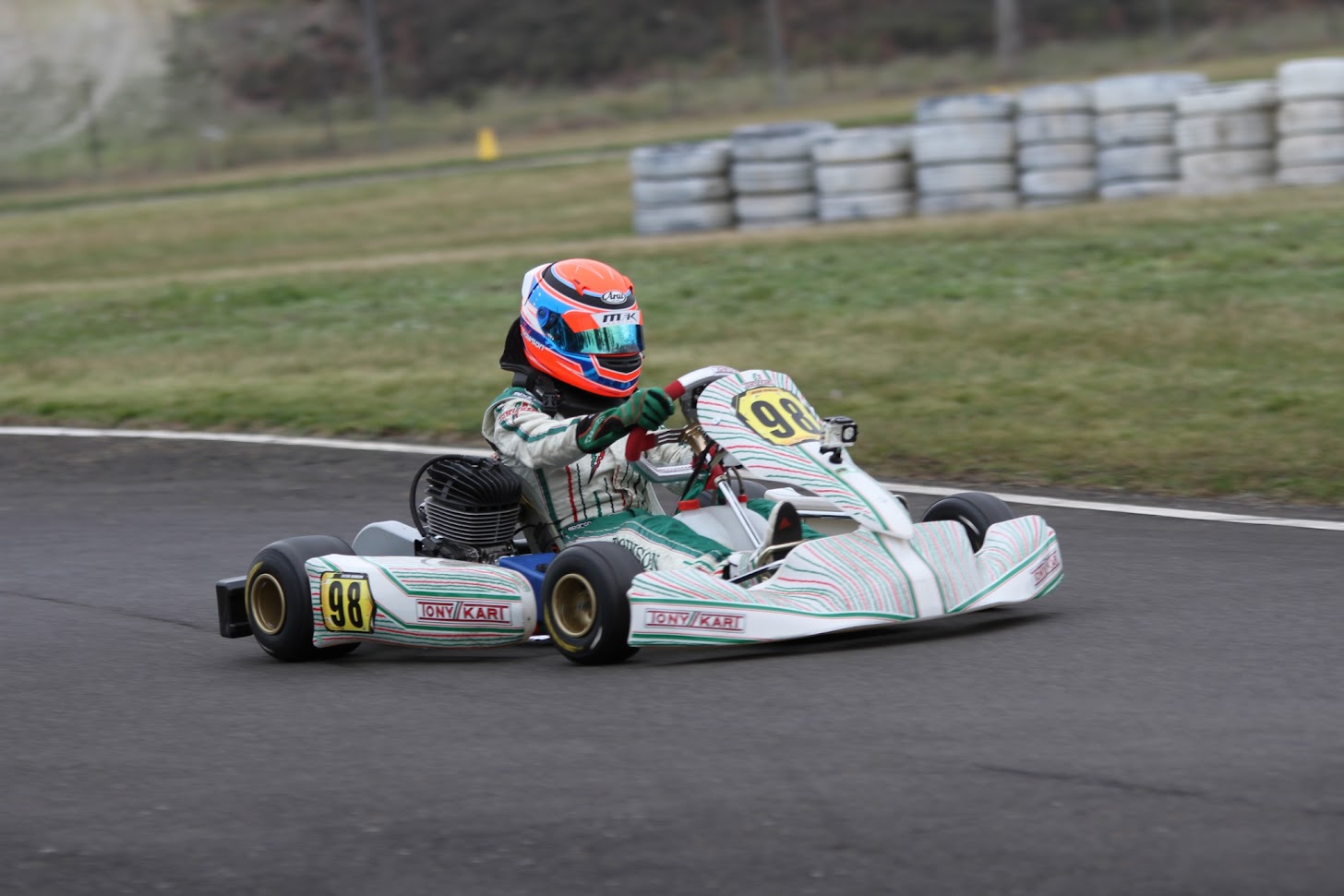 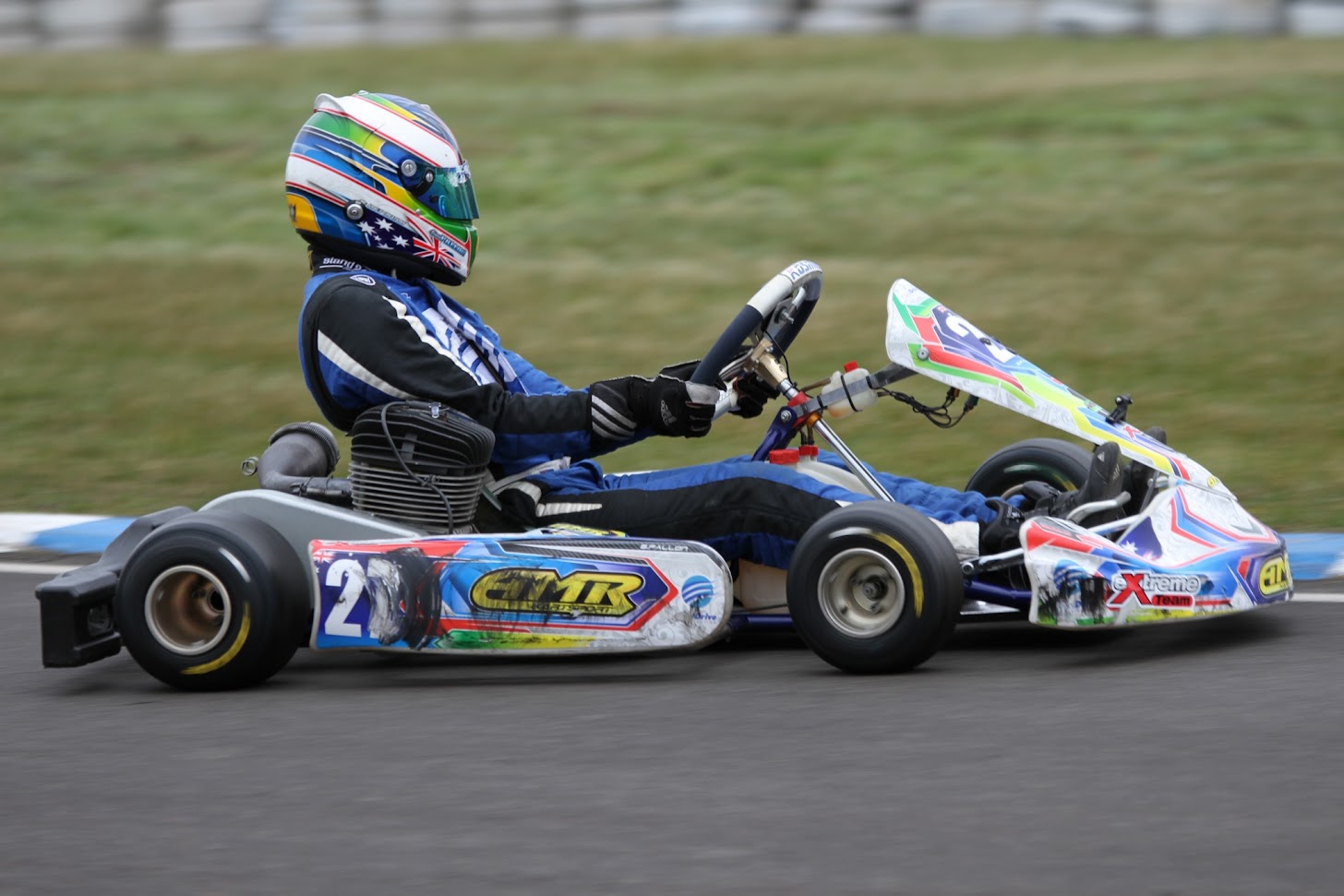 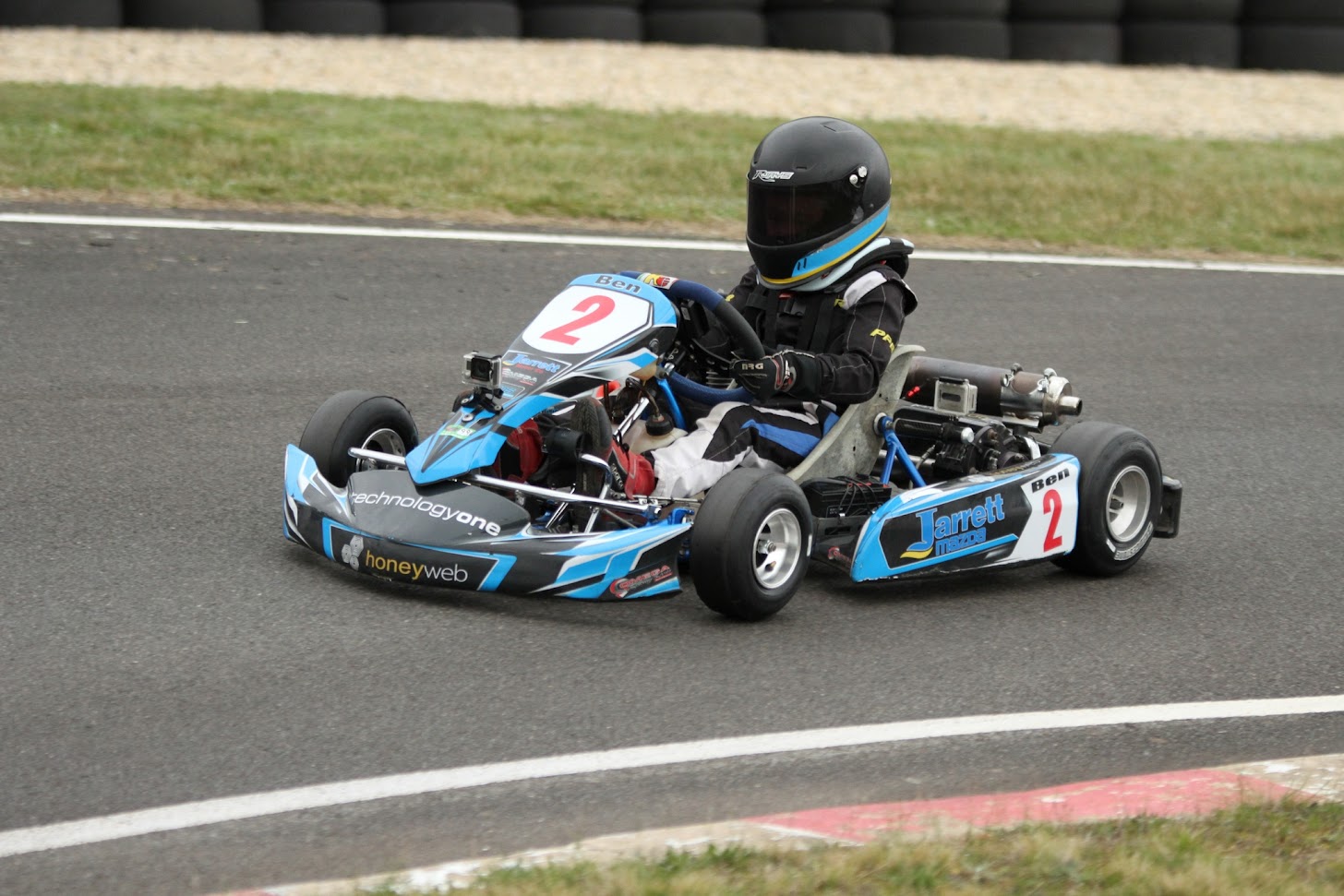 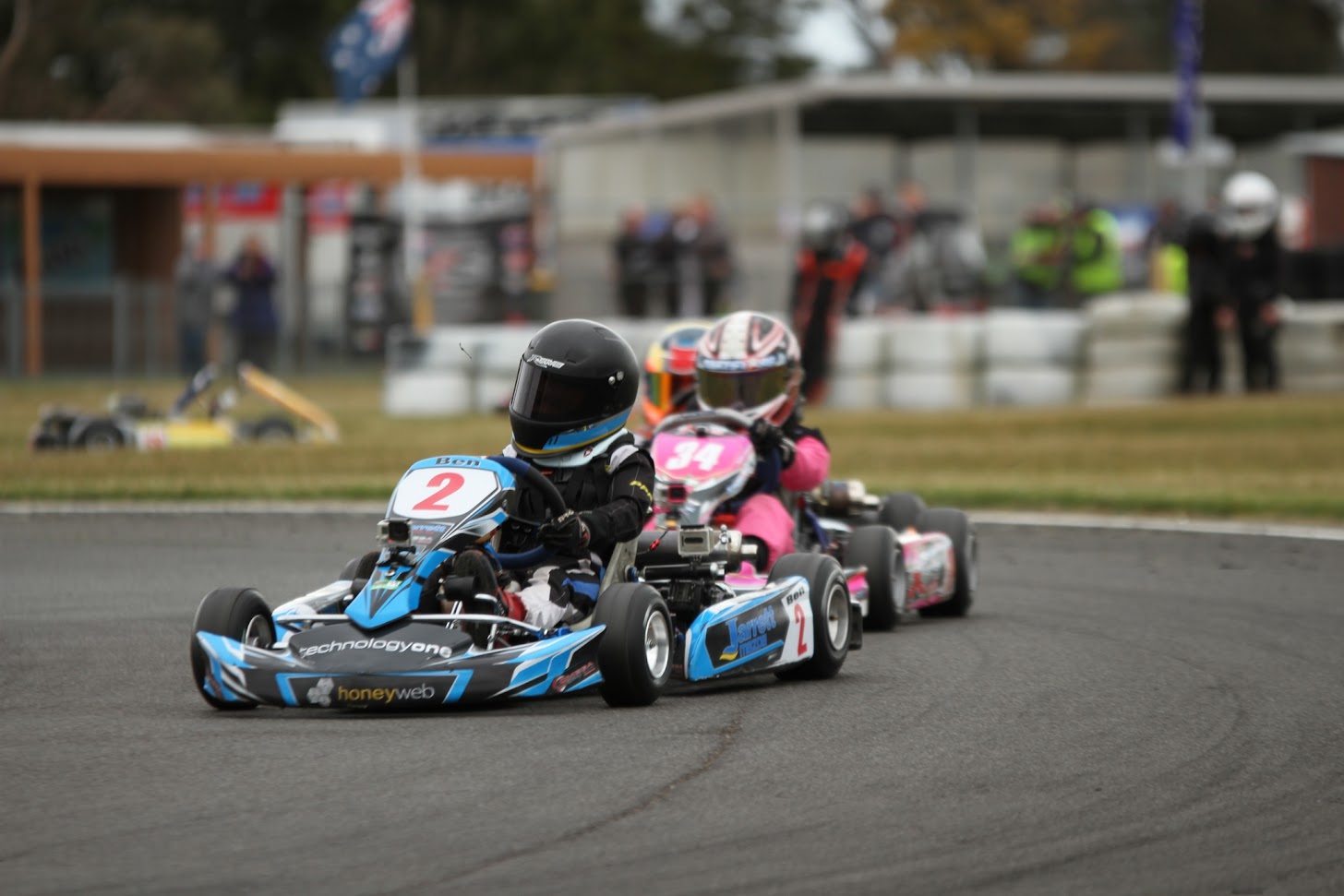 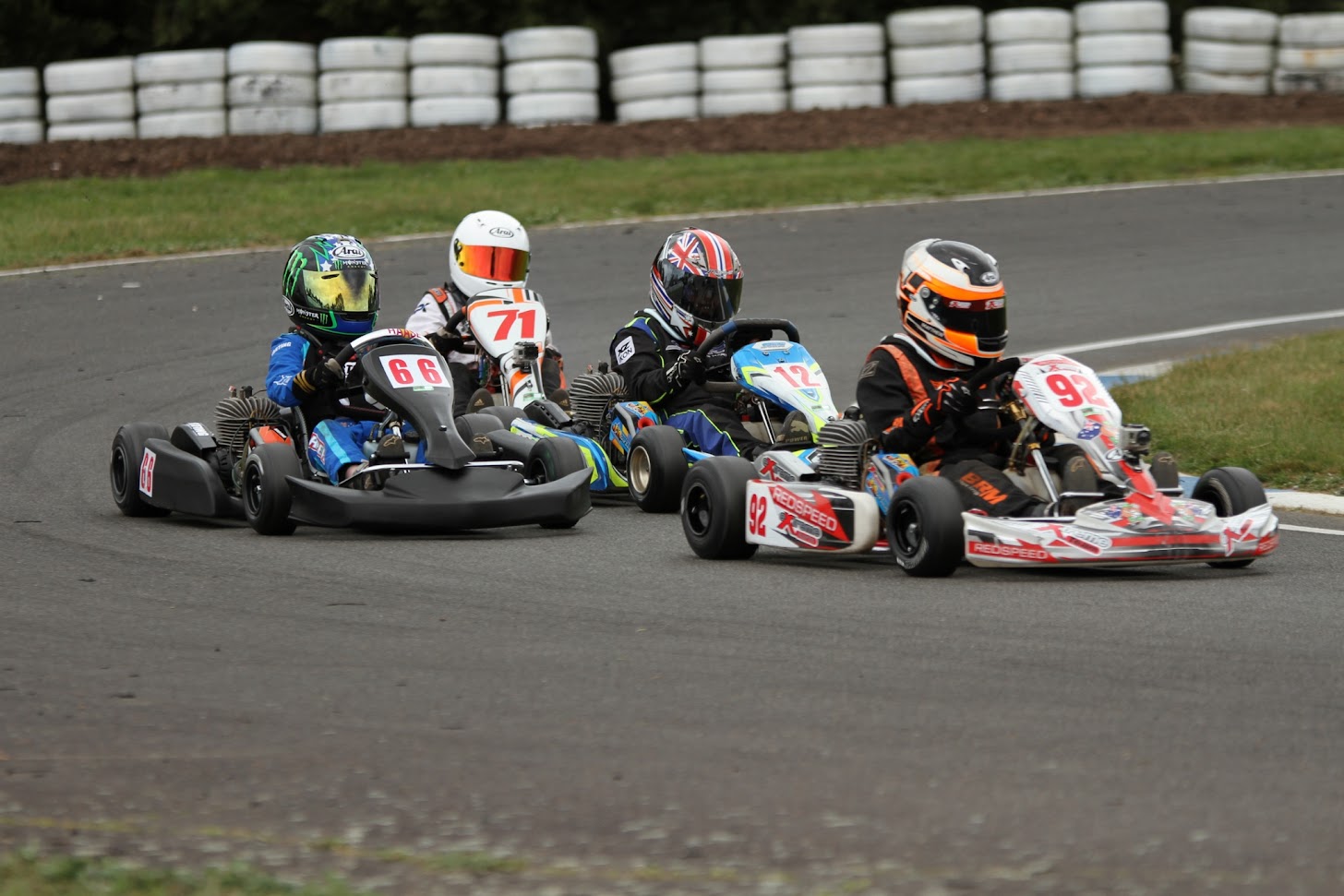 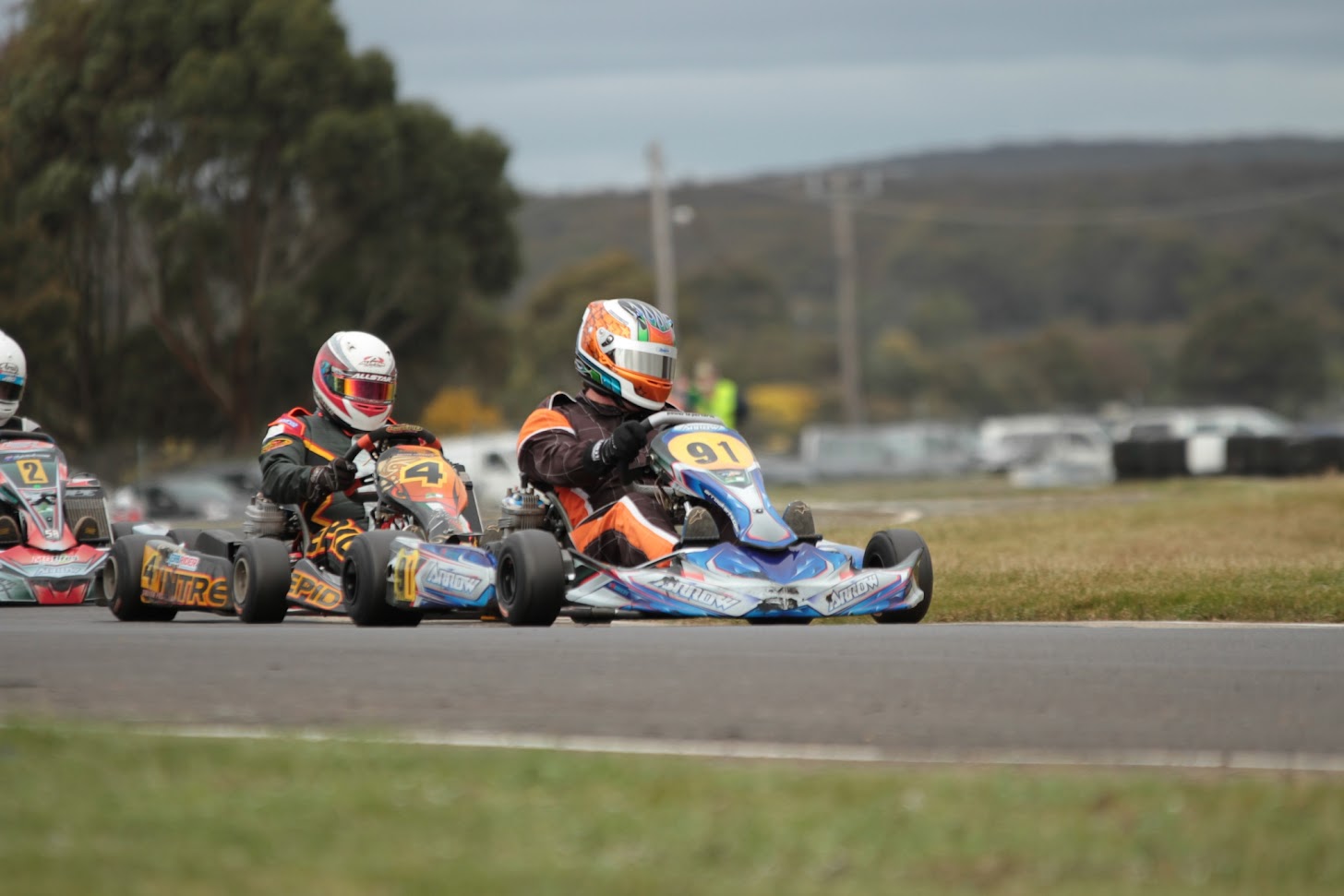 #4 Scott King grabs yet another round win in TAG 125 Heavy, but was threatened by #91 Ryan Aitken in the heats 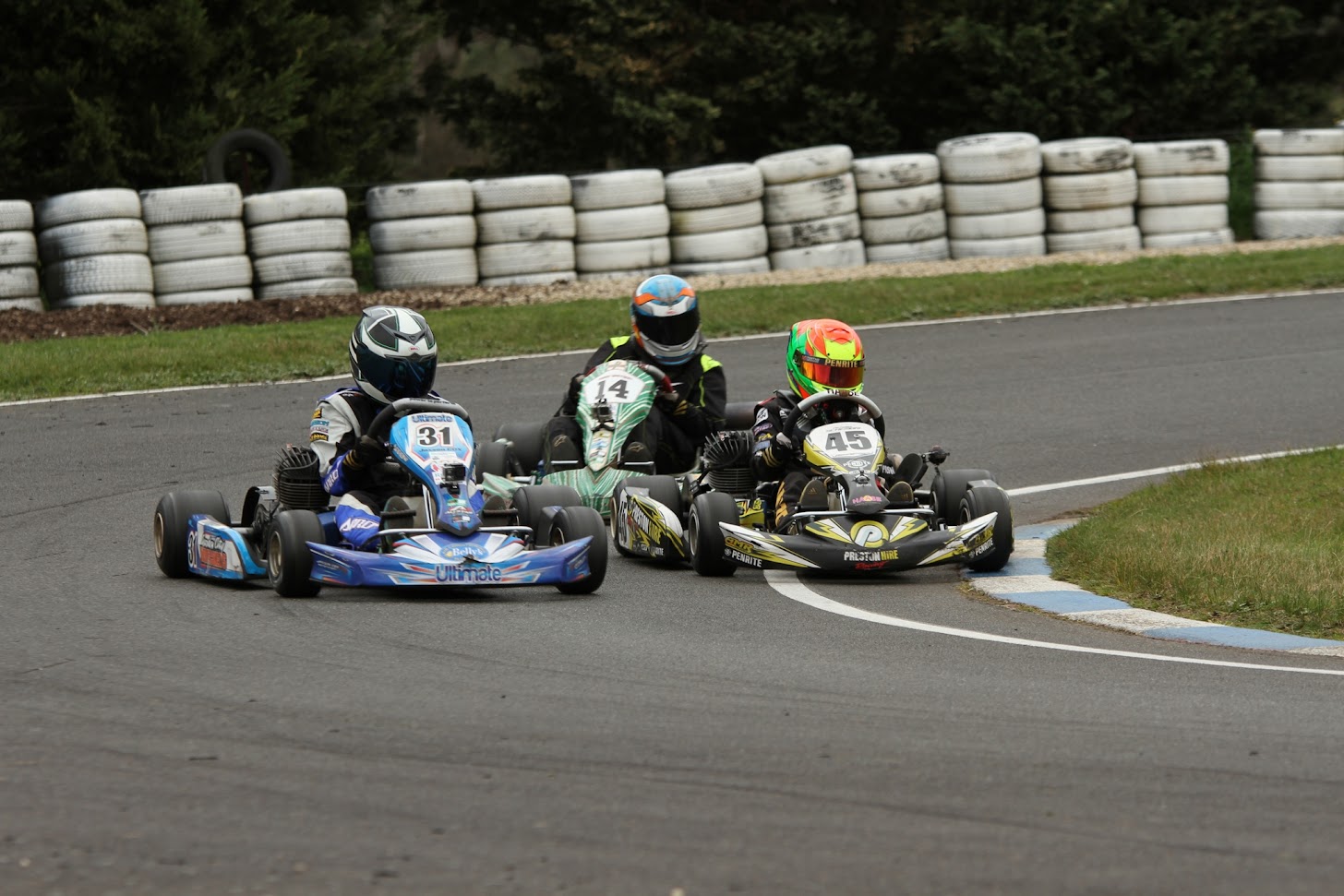 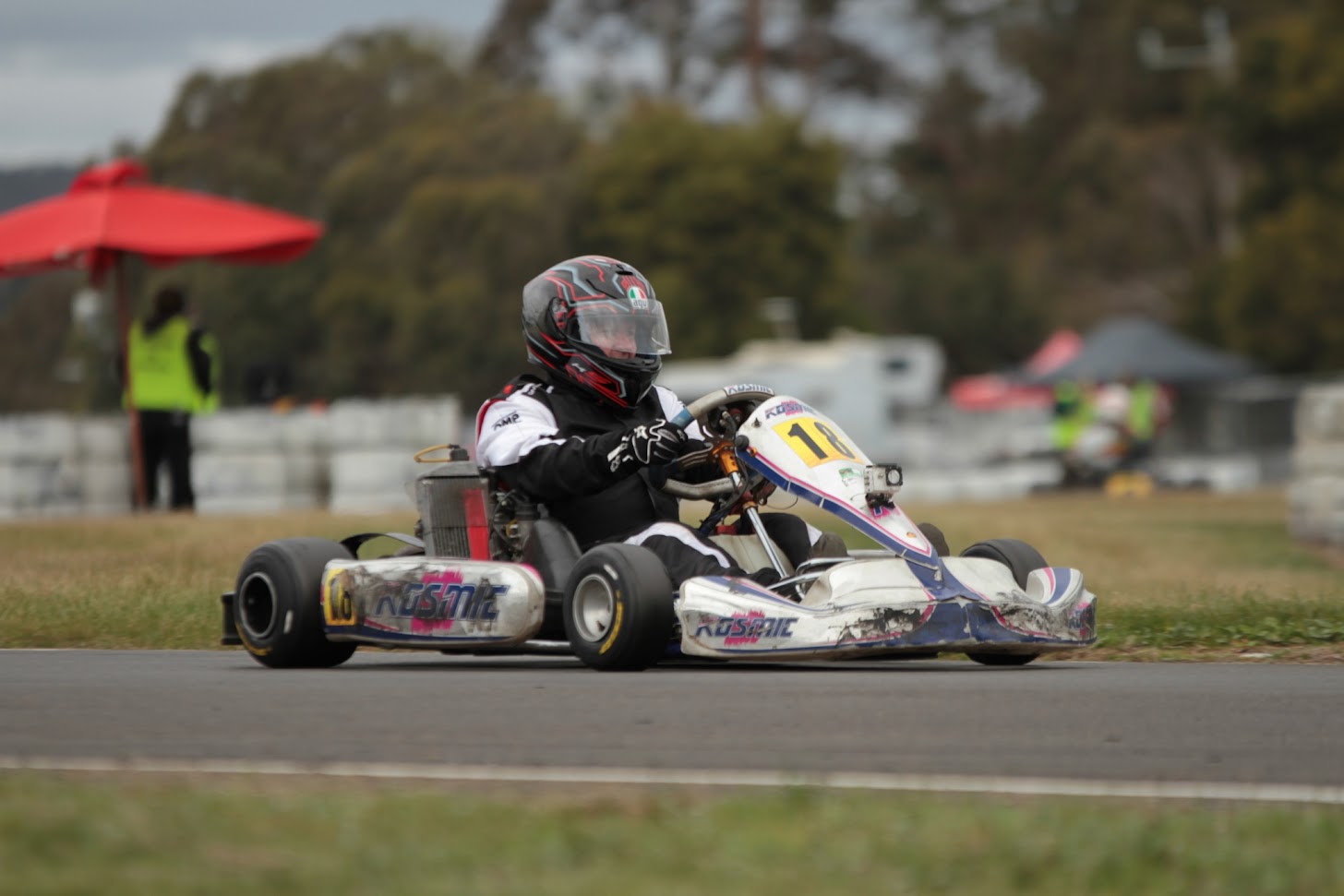 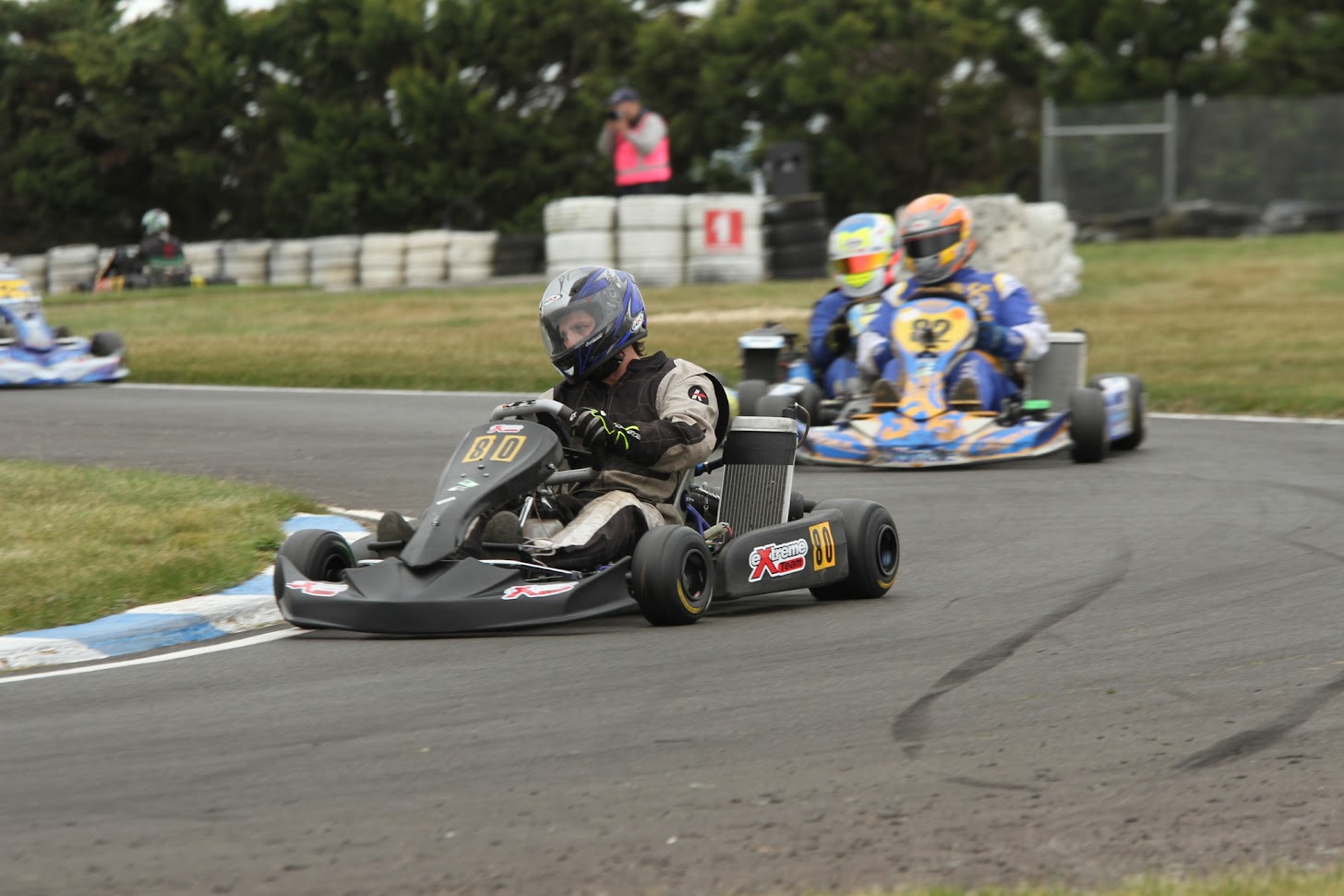 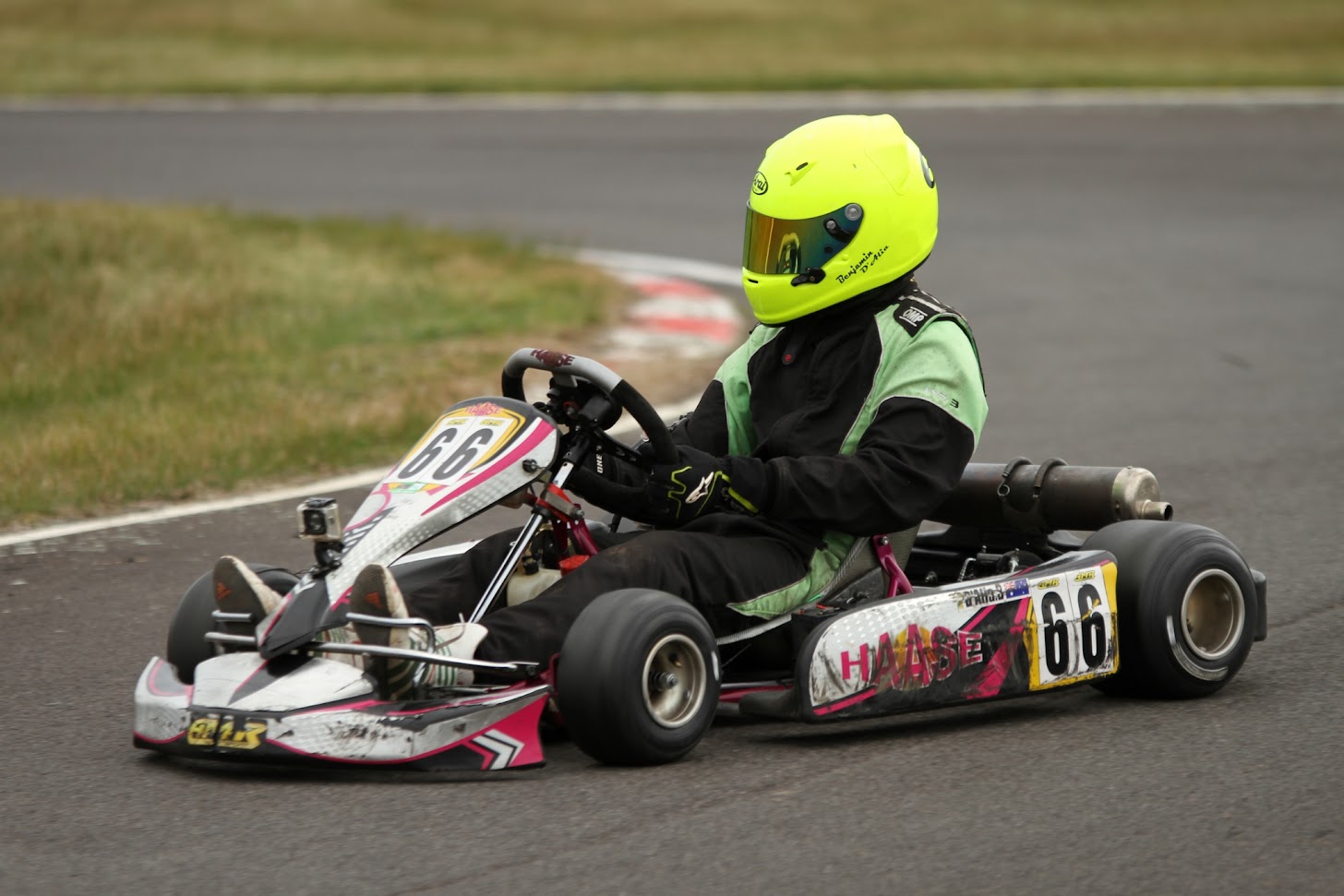 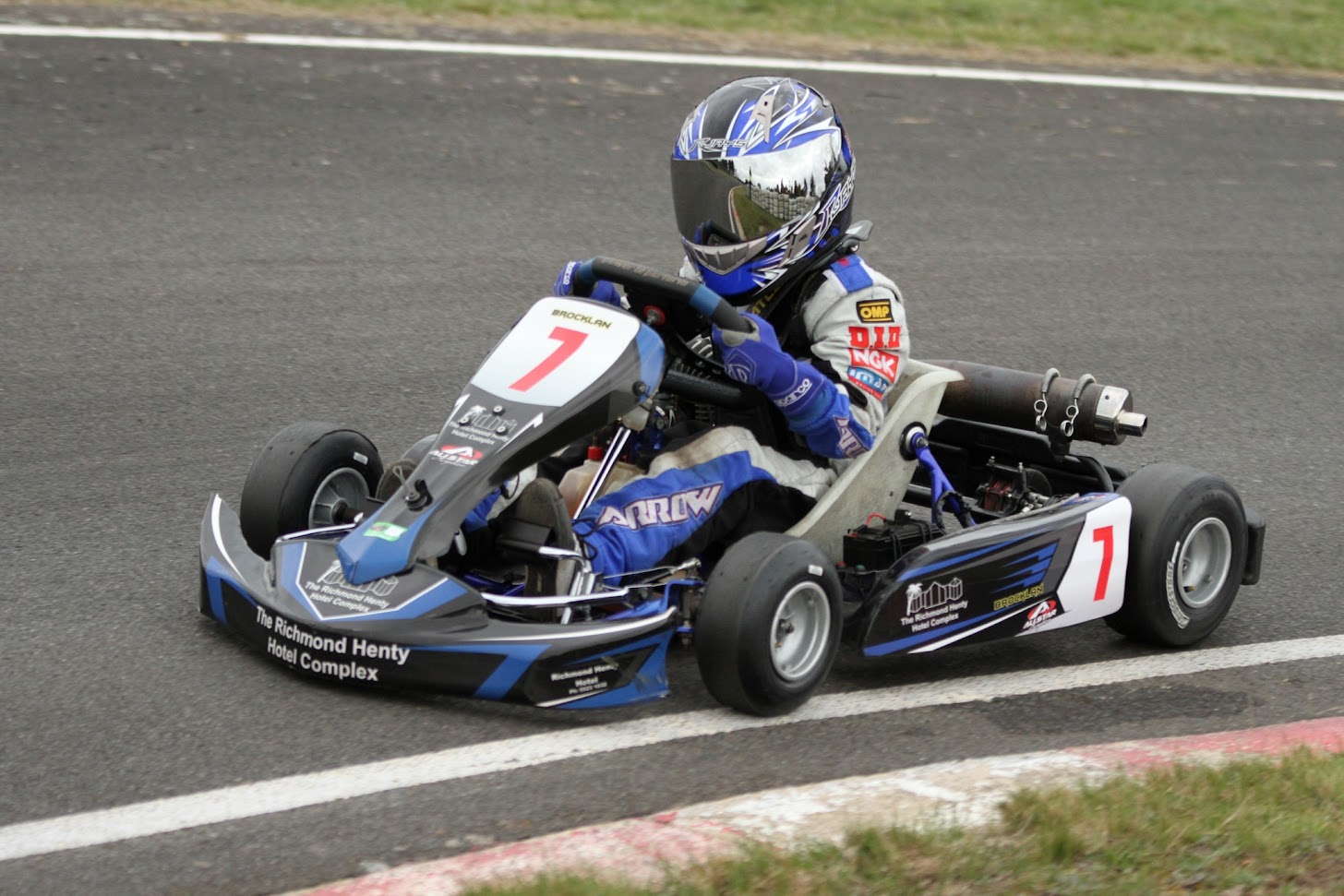 Brocklan Parker #7 grabbed 6th in Cadet 9, and the Kerbrider Cadet of the day 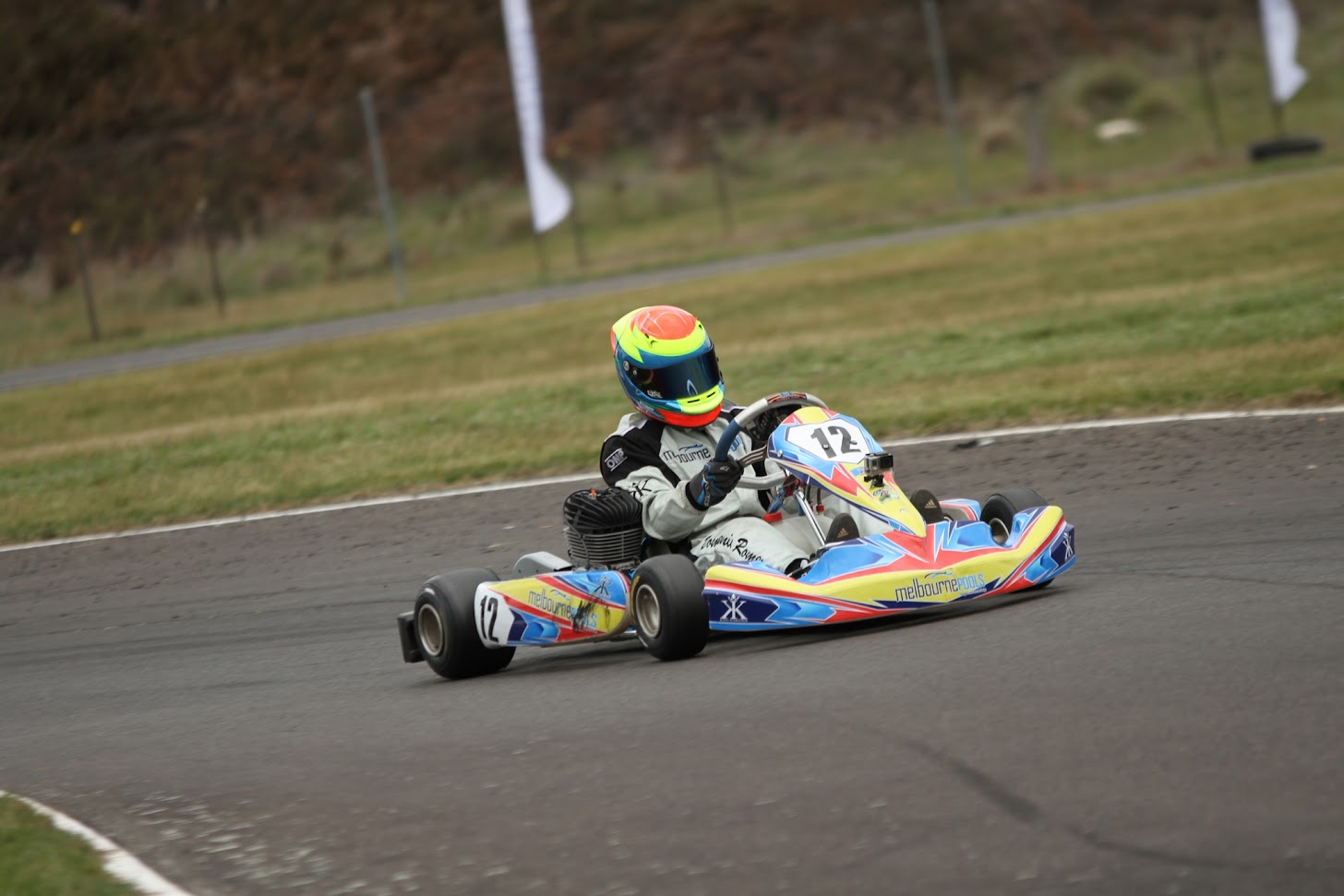 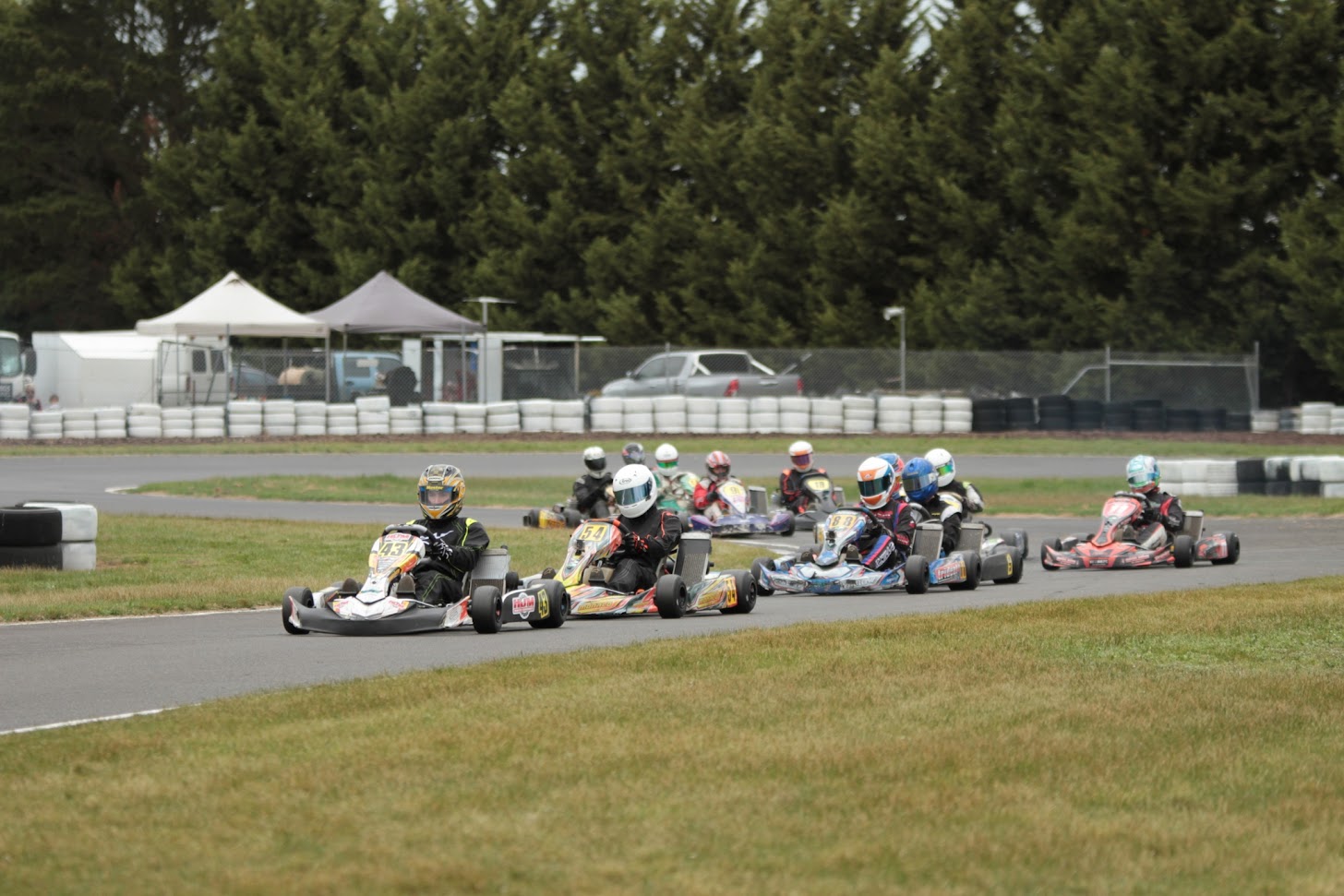